Let’s talk about Mexican cinema: the case of Sector Cine

The Mexican film site, managed by ICO, was awarded an honorable mention in the last edition of the AMCO Awards.

Today the digital publishing world faces two major challenges: The first is that each content must be “winning” and sold by itself. But that is not enough; it’s not enough with the“like.” Such “winning” content should be differentiated from the rest and generate conversation. And the reality is that digital outlets have saturated the market to such an extent that it is increasingly difficult to differentiate.

In response, different pages have chosen to focus on niche audiences. In doing so, they seek to generate conversations that, rather than generating likes for individual pieces, are provided by subscribers faithful to the voice and style of their digital spaces.

Such is the case of Sector Cine, site that improved its positioning thanks to the generation of specialized content in Mexican film themes. Next, we share the strategy that the ICO team followed to, together with the customer, make this portal a generator of conversations about the national film industry.

Founded in July 2016, Sector Cine was a site with almost zero positioning during its first 20 months.

The reason: the 50/50 proportion of content dedicated to national/international cinema was not enough to differentiate it from other pages and generate conversations capable of overcoming the prejudices that permeate contemporary Mexican cinema. Just take a look at social media and commentary on Mexican websites with general movie content to realize that the moviegoer has deep-seated stereotypes about Mexican movies. For many, national cinema is synonymous with poor quality comedies or is a depressing cinema, full of sleazy and sordid themes.

By getting involved in the project in May 2018, ICO presented a proposal with the potential to improve this situation: to increase the amount and variety of content and to focus the conversation on a diverse Mexican cinema, with exponents of many genres, with an equation 70/30.

This strategy, while risky, was in response to a tactical principle and a conjunctural opportunity for Mexican cinema. 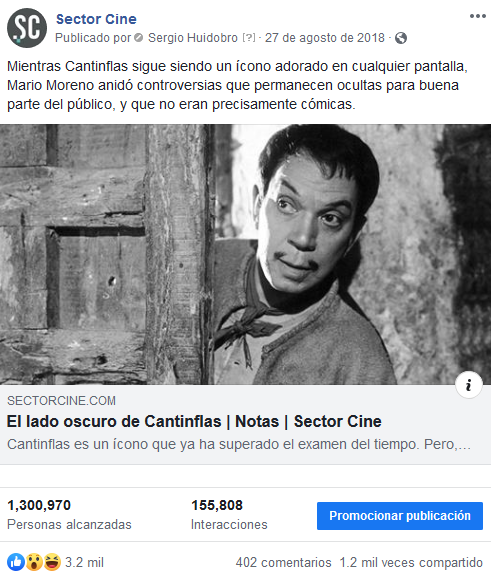 Increasing the amount of content dedicated to Mexican cinema was only part of the equation; it was also necessary to give them a higher level of journalistic situation. For this reason, an editorial grid (editorial calendar by day and time of publication, both on the website and on social networks) was raised with scheduled notes and on-going texts published at the time: from set visits and premieres to festivals and red carpets.

The next step was to expand its offering: this added film, tv and streaming reviews (made by recognized critics); other journalistic genres such as in-depth reporting and event chronicles; fun content such as poster/trailer analysis; videos with dynamics with Mexican actors and actresses; and more multimedia content (such as this podcast series). All in accordance with an editorial calendar in stages to meet objectives and set priorities.

The generation of conjunctural content has helped to improve the positioning of the site.

The result: by the middle of the current year, the website reached more than 300,000 unique monthly visits over two consecutive months; as well as 400,000 followers on social media. Hence, in the most recent edition of the AMCO Awards, the project was awarded an honorable mention.

It should be clarified that none of this would have been possible without the support of the client, who has relied on the experience of ICO, followed up on every aspect of the project and made precise notes on the direction that must be followed to continue to grow and evolve.

If you would like to know Sector Cine, click on the link; and if you want to know more about the agency responsible for this project, we invite you to check our site and follow us on social networks.

ICO is an agency with three decades of experience in the development of content and communication strategies for brands and companies. It is made up of specialized journalistic, editorial and advertising talent.